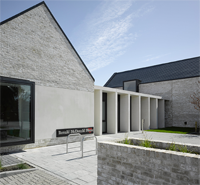 The 39th annual Brick Awards 2015 are scheduled for Wednesday 18th November at The Hilton, Park Lane in London.

Shift Brickwork were also recognised with a nomination in the Specialist Brickwork Contractor category, acknowledging the contractor’s contribution to the industry through achievements in training, investment and health and safety.

Similarly, the Darbishire Place project, which has been shortlisted for the RIBA Sterling Prize, has also been named in the Best Housing Design Award category for its use of Marziale bricks.

The Housing Design Award is for any type of private or public sector new build accommodation containing six units or more – with particular attention paid to the design and use of brick throughout the scheme.

Elsewhere, the Littleton and Elliot Schools project has also been nominated for four separate awards including; Best Public and Education, Innovative Use of Brick and Clay Products, Specialist Brickwork Contractor of the Year and Craftmanship.

Brickwork contractor Lee Marley is being recognised for its use of Wienerberger Flemish Mixture Desimple bricks on the Eton school.

The City Park West project in Chelmsford, helmed by contractor Conneeley Façades, was also shortlisted for both the Innovative Use of Brick and Clay and Best Outdoor Space Awards for its utilisation of the Corium brick cladding system.

Wienerberger Director of Marketing Annette Forster commented on the nominations: The BDA award nominations are a great achievement for everybody at Wienerberger, our customers as well as the architects and contractors that were involved in all the projects that have been nominated and shortlisted  our team has worked so hard to compile the entries and we are looking forward to the awards ceremony to hopefully repeat our success from last year.