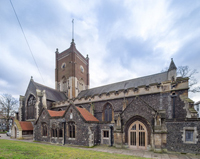 The overall project was valued at £1.7m and has transformed the church into a revitalised centre for heritage and community.

The underlay was specified to complete the church’s roof refurbishment

The present building dates back to 1120, though the choir vestry – where the Permo air underlay was installed – was added in the 1920s.

Ptolemy Dean Architects – a practice specialising in the conservation of historic buildings – drew up plans which included opening up two entrances on the church’s north side.

The North-West porch had previously functioned as a boiler room, whilst the second entrance had not been used since the early 19th century.

Permo air is being used as an underlay on a growing number of conservation and restoration projects, in addition to new build housing.