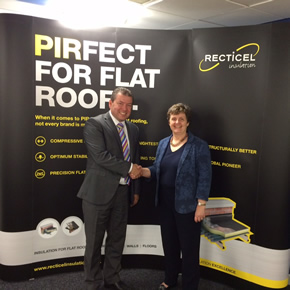 Over the past few weeks, Recticel has welcomed an MP and MEP into its PIR insulation manufacturing facility, which has benefited from a multi-million pound investment programme.

As the West Midlands’ MEP, Anthea McIntyre boasts an impressive background in business.

She was recently welcomed at Recticel’s 175,000 square foot factory, which is based in Stoke on Trent. A fortnight earlier, MP for Stoke on Trent South, Rob Flello, also paid a visit to the facility.

Each VIP was hosted by Kevin Bohea, Recticel’s commercial director, who was joined by the CEO of the British Rigid Urethane Foam Manufacturers’ Association (BRUFMA) for Mrs McIntyre’s visit.

The visitors spent the mornings of their trips learning about the company’s recent development; it has invested millions of pounds into its plant, with the aim of making it into the most modern PIR manufacturing facility in Europe.

As part of this extensive investment, a new line with full rebating ability has been commissioned, which has led to the creation of 30 new jobs for local people.

Later in the visit, Kevin conducted a presentation to demonstrate how Recticel’s research and development programme has produced new products, which have been created to assist with building more efficient homes.

The products work to reduce household energy costs, without the need to use high-maintenance renewables on a new build.