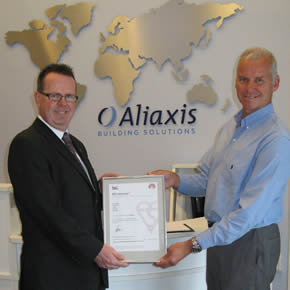 Renowned for its plastic pipes, Marley Plumbing & Drainage has been awarded for ‘45 years of excellence’ by the business standards company, BSI.

Although plastic pipes were first developed for domestic plumbing use in the 1920s, commercial production did not begin until the mid-1950s. In 1955, Marley formed an extrusions company, making use of a relatively new PVC technology.

By emulating cast iron – the material which is most commonly used for drain pipes – Marley became the first to manufacture rainwater gutters in Britain.

In November 1971, Marley and its associated sister companies’ manufacturer, DHM Plastics, was awarded KM 05495. This is the earliest surviving Kitemark license for plastic pipes.

BSI continues to offer the Kitemark license for pipes made from plastic, clay, copper and ductile iron; it has also provided a variety of additional schemes for pipes over the years.

BSI’s construction certification team manager, Shaun Corkerry applauded Marley at its site in Lenham, before handing over the prestigious award.