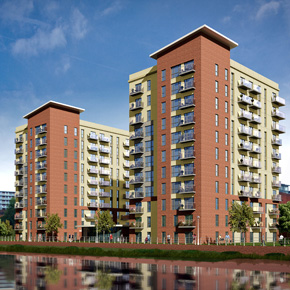 The Directors of Stockport based SCC Design Build say they are delighted with the progress at a high-profile development in Manchester and believe the project will be ‘good for the city’.

Phase one of Pomona Island, is a ground-breaking Private Rental Scheme in an up-and-coming area of the city.

The work took 29 weeks to complete, having started on the 29th August 2016, with the 22-acre site straddling Salford, Trafford and Manchester, sitting on the Manchester Ship and Bridgewater Canals.

Once a thriving dockland, it has laid dormant for decades. Plans filed by property giant Peel and developers Rowlinson were designed to turn Pomona Island into a thriving neighbourhood, set to be renamed Manchester Waters.

Phase two, which could see more than 3,000 flats eventually built there, is expected to be completed in 2019.

Regarding the lack of housing in the city, Managing Director Eamonn O’Donnell says: “The demand for new housing is at its highest level, with Manchester now needing one new home per hour.

“We are a pioneer of alternative methods of construction and are delighted to have been involved in this project. All things considered, we feel it will be a positive development for the city, when you consider the supply-side benefits.”

The project has not been without its controversy however, as some members of the public came forward to voice concerns when plans were first filed to build on site.

With worries about the impact the project may have on the environment and wildlife, a petition was organised.

Well aware of this, Eamonn O’Donnell says: “There is an on-going tension between developing areas of the city and understanding the impact this will have on the environment.

“The petition and concerns raised by some members of the public were heard and played a big part in the decisions made about how best to bring this project to life.”