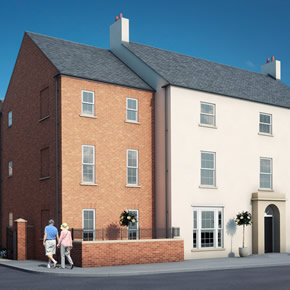 Wienerberger’s Porotherm clay block walling system has been used to accelerate the construction of a new McCarthy and Stone development, based in Ashby de la Zouch, Leicestershire.

The development, which consists of 32 one and two bedroom apartments, is the third to make use of Porotherm in the West Midlands region.

Although the Ashby scheme was not originally designed and planned as a Porotherm project, the system presented the opportunity for quick construction. It was specified by McCarthy and Stone, working in conjunction with EH Smith and Wienerberger.

Block work commenced on site at the end of March, followed by roofing works at the beginning of April. Six weeks were allocated to roof the project, compared to an average of 16 weeks using traditional methods.

The quick speed of the build also allowed the builders and contractors to progress with its internal aspects earlier than would be traditionally expected.