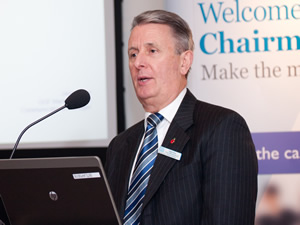 From minority and majority victories to a variety of formal or informal coalitions, the outcome of tomorrow’s General Election is unpredictable.

This uncertainty makes planning for the post-election extremely difficult.

However, the GGF has collaborated with its political consultancy firm, GK Strategy to devise a political PR lobbying plan, which has been designed to address its Members’ concerns.

For over five years, we have worked hard to take our campaign messages directly to cabinet ministers, government departments and officials. This will remain our priority – Nigel Rees, GGF Group Chief Executive

The primary objective of the plan is to ensure that the GGF’s voice is heard in local and central Government.

The Federation hopes to partner with trade bodies and pressure groups to enhance its campaigns and add to its voice.

Despite the forthcoming changes to Government, the GGF aspires to continue directly engaging with important decision makers.

It intends to listen to and consider its Members’ concerns on current and future policies, regulations and legislation.

The GGF’s plan targets the media, Government officials and key Government departments, as well as Cabinet Ministers, Shadow Ministers and other authorities and related organisations.

It will tailor its broad campaign messages for specific communications to these key targets.

The message will be delivered using a variety of PR platforms, including broadcast, print and social media. The appropriate method of communication will be selected for certain media opportunities.

As the GGF’s political advisers, GK Strategy will complete quarterly reviews of the Federation’s messages to ensure that they are aligned with the campaign’s objectives.

The Federation also aspires to make contact at campaign related events; it hopes to arrange meetings at a variety of locations, including local constituency offices, GGF Members’ premises and MPs Westminster offices.

With its political campaigns ongoing, the GGF will keep its Members up-to-date by issuing online reports and posting stories on its digital news service, Newswire.

It will also communicate changes and developments at relevant GGF specialist group meetings and its upcoming Members’ Day, which is scheduled to take place at Glaziers Hall in London on 1st September.

To help its Members keep track of its activity, the GGF has extended the Members’ Area of its website to include a new micro-site.

The Political Campaigns micro-site comprises five sub-sections for each of the GGF’s campaigns.

Each sub-section links to any documents and news articles related to the campaign in question.

The site will also feature a political blog with contributions from GK Strategy.

In addition to this, the Federation plans to introduce a regular news update feature, which will be included in the GGF’s Members newsletter.

Although the micro-site has been established for Members, the GGF also intends to create a version for public access to inform the wider industry about its political activity.