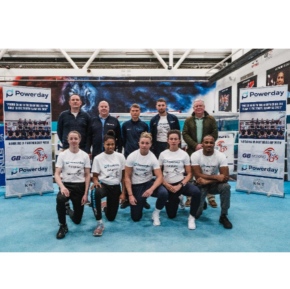 Ahead of the 2020 Olympics, Powerday has announced a partnership with GB Boxing, the organisation which manages the Olympic boxing programme.

The agreement was announced recently at an unveiling ceremony at the English Institute of Sport, which featured the full Boxing Road to Tokyo squad. This with the Boxing Road to Tokyo Olympic qualifier which will begin at the Copper Box Arena this weekend (14-24 March 2020) when 13 members of the GB Boxing squad will have an opportunity to secure a place at the 2020 Olympic Games.

GB Boxing’s partnership with Powerday, one of the country’s largest family-owned waste management and recycling companies, will allow the organisation to continue its on-going work to develop and create opportunities for talented young boxers as part of the World Class Performance Programme.

The partnership complements Powerday’s longstanding presence in the sport and its unrivalled commitment to supporting aspiring boxers. Over the past five years, its charitable Powerday Foundation has sourced and delivered more than £14million of funding for London-based boxing clubs and projects at grass roots level.

One of its biggest successes is a bursary scheme which has helped 40 youngsters over four years. These include Caroline Dubois, who is currently undefeated and has already won gold at the European Junior Championships, World Youth Championships and the Youth Olympic Games at Buenos Aires in 2018 – achievements which saw her recently crowned at the BBC Young Sports Personality of the Year for 2019. The 19-year-old is a member of the GB Boxing squad and will compete at the forthcoming Boxing Road to Tokyo qualifier where she hopes to secure her place at the 2020 Olympic Games.

Eight men and five women from the GB Boxing squad will complete the Olympic qualifying event, where more than 350 boxers from over 40 countries will compete for 77 places at Tokyo 2020. With 11 teams from England and two from Wales, Seven of the eight men selected have won at least one medal at a World or European Championship.

Powerday Chairman Mick Crossan and Vice Chairman, Edward Crossan, comments on the partnership: “As a company, we have supported this inspirational sport from London 2012, through our community projects across the capital, as well as supporting the health and mental well-being of young people and talented boxers.

“We are delighted to now be supporting our national elite ‘Lionhearts’ who will be seeking to fulfil their goals and aspirations by competing at the highest level of sport in Tokyo this year. And we’re excited to help this exceptional event, with the support of the IOC, UK Sport and the Mayor of London, to further enhance London’s Olympic legacy.

GB Boxing’s Performance Director, Rob McCracken adds: “Powerday has a longstanding commitment to boxing and their support will help us to continue to prepare and develop the team as we head into the Olympic Qualifying campaign.

“The team we have selected for London has a good combination of experience and natural talent. The men are a capable and battle-hardened group that have gained a lot of experience on the international circuit over the course of this Olympic cycle and know what is required to be successful at the top level.

“The women’s squad has made good progress in the last 18 months. Jointly, the men and women had an excellent year in 2019, winning 16 medals at four major championships so they are coming into the qualifier on the back of a good run of form.

“Having the event in London is a great opportunity for the boxers and hopefully having the crowd on their side will inspire them to produce their best.”