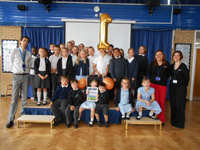 The Eco School competition was created by Mitsubishi Electric under its educational the Learning Curve’ programme, open to all schools and youth groups that are committed to raising environmental awareness in their communities.

Competitors were asked to examine six key areas – waste, energy, bio-diversity, travel, water and health – with the children. They were then invited to take the Green Invention Challenge’.

The Eco-Team and Year 5 from Rowans Primary School successfully addressed the seven environmental challenges set for pupils to secure the top prize of £2,000 worth of environmental resources for their school.

Initiatives, such as the use of regular energy monitoring charts and the introduction of recycling bins, were complimented with ideas, such as a vegetable garden, to encourage the children involved with the programme.

The initiatives have been developed to help the children to identify waste from areas, such as leaky taps.

Jenny Maskrey, who manages the Learning Curve, says that the school has epitomised the idea of the competition by engaging with their community.

Mitsubishi Electric plans to launch another competition within the next academic year; further details can be found on its dedicated Learning Curve website.