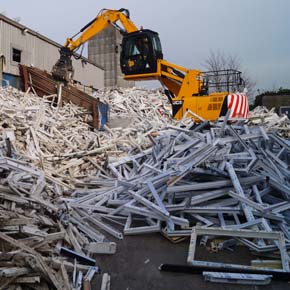 The collection and recycling of waste PVC in the UK reached a new high, according to latest figures from Recovinyl, the PVC industry’s recycling scheme.

The window profiles recycled represent the equivalent to more than five million window frames (5,158,483) or enough to glaze 515,848 houses (assuming each house has 10 windows). That’s enough to renovate all the dwellings in both Manchester (217,240 homes) and Liverpool (206,500 households).

The UK’s robust performance represents 21% of the total recycled across Europe, with Recovinyl being the main contributor. A total of 560,492 tonnes of waste PVC was recycled through Recovinyl last year across its 18 European member countries. The Recovinyl network currently comprises 153 recycler partners.

“The recycling of PVC is maintaining an upward trend thanks to on-going investment in recycling infrastructure and strong commitment from the sector. It’s a significant achievement that demonstrates the sustainability of this readily-recyclable material,” comments Project Manager Jane Gardner of Axion, Recovinyl’s UK agents.