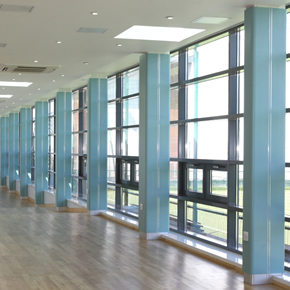 Farnborough Sixth Form College originally opened the centre, which honours the double Olympic gold medallist, in 2007. It has recently been expanded to cater for the college’s physical education facilities.

The new extension links the Dame Kelly Holmes Centre with a separate sports hall, whilst providing additional recreation and social space for students.

The annexe benefits from glazed curtain walling, which runs along the full length of the building from its new entrance. It is supported by 16 columns, manufactured from robust structural steel.

Encasement’s rectangular Quadra casings were specified to conceal the columns, to improve interior aesthetic. Suitable for use in high traffic areas, the casings are commonly specified throughout the education sector in classrooms, lecture theatres and public areas.

Prior to installation at the centre, each casing was manufactured from pre-formed plywood, at 8mm thick, and finished in Formica ‘Dusty Jade’ matt green laminate. Matching infill strips have been incorporated to give an integrated finish to the vertical joints.

Whilst most of the Quadra casings stand at 3 metres tall, Encasement had to make several amendments to allow for two changes in floor level. After the casings were trimmed and tailored, the installation was carried out seamlessly.