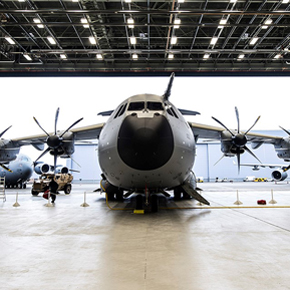 As RAF bases are typically situated on exposed sites, the rapid response to changing conditions when hangar doors are opened required a heating system which was highly efficient and offered both rapid heat recovery times and considerable cost savings.

AmbiRads’ Nor-Ray-Vac continuous radiant tub system was specified for the project, having been used extensively across many civilian and military hangars, including two previous installations at RAF Brize Norton.

The previous installation at Base Hangar was considered very inefficient, with costs of £327K on gas in 2004 rising to £800K by 2012. As economy and effectiveness are the two key factors when selecting a heating system for an aircraft hanger, a more sustainable solution was needed.

Certain forms of heating are incompatible with the hostile environment caused by aircraft hangars. Warm air heating, for example, would not only consume fuel attempting to heat the volume of air in the hangar, but the temperature stratification would be enormous.

This volume of warm air would then only be replaced instantly with colder external air when the doors are open to allow aircrafts in and out.

Blanket heat coverage is therefore a prerequisite in aircraft hangars. The ideal system will be capable of heating the complete hangar area, but is also capable of being zoned by design to heat specific areas for when and where necessary.

AmbiRad’s radiant tube heating was therefore determined as an appropriate solution. Radiant tube heating is one of the most energy efficient forms of space heating available, burning fuel at the point of use so there is no loss of efficiency in distributing heat around the building.

In addition, the heating system responds rapidly to changing conditions, and the warmth generated by the system is less affected by cold air influx through doors opening and closing.

Nortek worked closely with RAF Brize Norton is developing the solution, and SSE contracting who installed the HVAC system.

David Craven, Base Hangar Operations Manager, commented: “Following the installation of the new AmbiRad Nor-Ray-Vac radiant heating system into Base Hangar at RAF Brize Norton the complexion of the environment has changed significantly. The improved heating in conjunction with a program of refurbishment has transformed Base Hangar into a more welcoming and pleasant working environment for the different users of the facility.

He added: “I am sure also that RAF Brize Norton will see a significant heat efficiency saving from Base Hangar which will not only see running costs reduced which is good for the taxpayer but also there will be benefits to the environment also.”