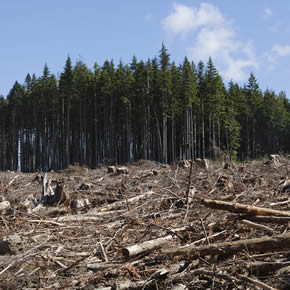 In a recent online survey, conducted by Oakwood Doors, only 28% of respondents demonstrated accurate knowledge of the amount of trees – 6 billion – being cut down each year.

The company is urging contractors and developers to use FSC-certified products, such as its range of oak doors, when working on projects.

Forests currently cover approximately 30% of the world’s land. However, this figure is being threatened by deforestation, which is defined as the clearing of the earth’s forests on a large scale.

Common reasons for deforestation include: the need to make space for urbanisation and housing; and the need to harvest timber for the creation of paper, furniture and other commercial items.

Deforestation methods often result in environmental and ecological damage; the practices of burning foliage and clear cutting, for example, leave the land infertile, which affects the surrounding nature and animal habitats.

Deforestation is also a major contributor to climate change. Forest soils are able to retain moisture, but lose this capacity when trees are unavailable to protect it from direct sunlight. Trees also help to maintain the water cycle, by recycling water vapour back into the atmosphere.

Without these roles, the forest land can quickly become an inhospitable space. Global warming occurs when carbon dioxide gathers to form a layer in the atmosphere, trapping radiation from the sun; during the process of photosynthesis, plants remove and store carbon in the form of carbon dioxide. When deforestation occurs, trees release this carbon dioxide back into the environment, increasing the amount of the gas in the air.

Forests are multifaceted ecosystems, which affect all of the world’s species. However, in Oakwood Doors’ survey, only 16.5% of the 400 surveyed were correct in thinking that 50,000 species are becoming extinct every year as a result of it.

By planting more trees, we can begin to counter deforestation. However, there is more that can be done: Oakwood Doors is encouraging more people to go paperless, recycle regularly and purchase recycled products. Attempting to eat vegetarian food as often as possible can also help.