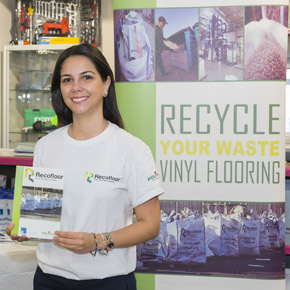 Recofloor has announced a new annual collection record, having collected 508 tonnes of material for recycling into flooring and other products in 2015.

Founded by flooring manufacturers Altro and Polyflor, the vinyl flooring recycling scheme has over 650 members throughout the UK and Ireland. Recycling waste vinyl flooring can reduce collectors’ waste disposal costs by up to 70 percent versus landfilling and also benefits the environment.

In the past year Recofloor has built up a strong relationship with distributors who contributed a total of 213 tonnes (42%) to last year’s total. Contractors contributed almost 178 tonnes (35%), whilst construction projects generated more than 28 tonnes.

Recofloor promoted the scheme through a number of trade and ‘Bacon Butty’ events at distributors’ sites across the UK. Activities included a communication campaign with distributors to encourage the use of drop-off sites.

The organisation also held a Love2shop promotion in August, where all members who raised a collection of smooth off-cuts, safety off-cuts or smooth uplifted vinyl were entered into a prize draw to win £100 in vouchers.

Recofloor will celebrate its achievement at its fifth annual awards event on March 3rd at Old Trafford next month.

The free-to-attend event will be hosted by former Southampton footballers Matt Le Tissier and will include a complimentary tour around the stadium.

Speakers at the event include Richard Catt from the Contract Flooring Association, who will update Recofloor members on CFA activity and Ian James, President of the National Institute of Carpet and Floorlayers who is also an instructor with the Floor Industry Training Association. Anthony Francis of Mayfield Floors will also be offering an insight into the benefits of using Recofloor for contractors.

The former England international will present trophies and certificates to Recofloor members who have excelled across the eight award categories and contributed to the increased volumes of vinyl flooring waste being diverted from landfill.