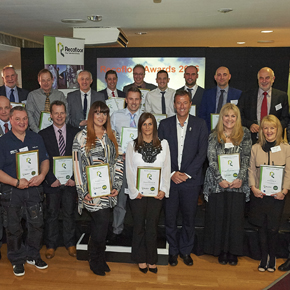 Recofloor has announced the winners of its fifth annual awards which recently took place at Manchester United’s Old Trafford in March.

The ceremony was hosted by former Southampton and England footballer Matt Le Tissier, who handed out awards across eight categories including Contractor of the Year, Best Newcomer and Recofloor Champion.

Carpets ’N’ Carpets of Treorchy were awarded the Contractor of the Year award for collecting eight tonnes of clean material in 2015 and regularly briefing its staff on the importance of separating material for recycling.

Distributors play a key role in the schemes success, which saw 508 tonnes of vinyl flooring collected in 2015 alone. 3D Flooring Supplies; MCD Wales, Flooring Accessories collected an impressive 58 tonnes of material and was named the Distributor of the Year. The company helped customers and Recofloor to return material via backhaul in the most environmentally sustainable way possible.

S&D Flooring Specialists Ltd were recognised as the Best Newcomer for embracing the scheme very quickly at its Hull premises, whilst STS Flooring Distributors of Watford were awarded the Greatest Improver award for its increase in tonnage collected compared to the previous year.

Mark Purnell of Fantasy Flooring Ltd was named Recofloor Champion having been nominated by his employer. Mark was recognised for his ‘passionate attitude to recycling and the environment.

Directors Bob Smith of Polyflor and John Patsavellas of Altro both praised all 700 of the companies involved in the Recofloor scheme, recognising not just the cost savings that the scheme offers but its impact on the environment.

John commented: “Altro, like Polyflor, is proud to be a founder of this scheme, which is a core part of both our sustainability programmes. Recofloor as a scheme leads the way across the Europe. We have a ‘world first’ in collaboration that has created a scheme that really works. As Recofloor continues to evolve, others will find it very difficult to replicate.”

Material collected by Recofloor’s membership is recycled back into products including new flooring. This not only benefits the environment but can reduce collectors’ waste disposal costs by up to 70%. The scheme accepts smooth and safety vinyl offucts, uplifted smooth vinyl, roll ends and luxury vinyl tiles (LVT).

Key speakers at the ceremony included Richard Catt, CEO of the Contractor Flooring Association and Ian James from FITA.

Richard commented: “Sustainability and waste management are extremely important to our industry and Recofloor makes a significant contribution. Winning a Recofloor award is an achievement that is growing in recognition and an important addition to any company’s profile.

So congratulations should go to all the winners – particularly the significant number who are CFA members.”