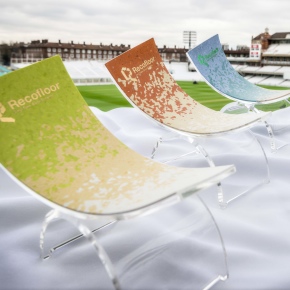 Recofloor has collected 3,289 tonnes of smooth and safety vinyl offcuts and roll ends, uplifted smooth vinyl and luxury vinyl tiles since its creation in 2009, by Polyflor and Altro.

A record number of entries were received and were judged mainly on last year’s achievements, while also recognising collectors’ significant contributions in various ways.

Middlesex Flooring Ltd was awarded Contractor of the Year for showing ‘impassioned attitude’ towards the scheme and demonstration of ‘exceptional commitment.’

Playing a significant role in the scheme’s success by extending services to allow fitters to drop off smaller volumes of waste vinyl flooring at sites, MCD was named Distributor of the Year.

Drop-Off Site User of the Year went to Fantasy Flooring Ltd, being a significant contributor to Recofloor over the years.

Ryjock Flooring ltd scooped the new project of the Year award for the company’s use of Recofloor in a major on-going social housing refurbishment scheme for Sheffield City Council.

Wayne Conlan, Ryjock Flooring Managing Director said his son was proactive in establishing the scheme on the project as he knew it was going to generate a lot of waste. He explained that tackling environmental issues ticks a lot of boxes and therefore the company will continue to promote the scheme via the Ryjock website, emails and social media.

S&D Flooring Specialists Ltd was named a double award winner for Brand Ambassador and Outstanding Achievement. The company’s website has a dedicated Recofloor section and collected the largest volume of material by any contractor.

Interserve was awarded Greatest Improver after a 240% increase in tonnage collected compared to the previous year.

Finally, Carpets ‘N’ Carpets was given the Longstanding Service Award, due to collecting nearly 60 tonnes in total since joining in 2011.

The Recofloor scheme allows material collected to be recylcled back into products, including new flooring, which benefits the environment and can reduce collectors’ waste disposal costs by up to 70%.

Recofloor Manager Jane Gardner said “Recofloor is making an impact at the heart of the Circular Economy through recovering resources for reuse.”