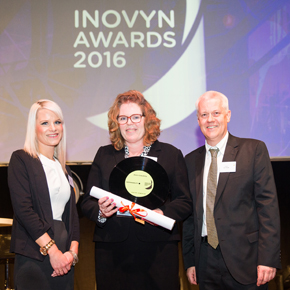 Axion Consulting’s PVC medical device take-back scheme, RecoMed, has been recognised at the 2016 INOVYN Awards for its innovative approach to sustainable healthcare recycling.

An estimated 2,250 tonnes of PVC could be recycled by collecting items, such as anaesthetic facemasks, oxygen masks and associated tubing, from hospitals in the UK.

Set up in conjunction with the British Plastics Federation in 2014, RecoMed supplies recycled containers, communication materials and collections to participating NHS and private hospitals. The scheme is funded by VinylPlus and provides an alternative, sustainable disposal route for waste medical items manufactured out of medical grade PVC.

Nine hospitals are currently taking part in the RecoMed scheme and more are expected to join in the coming months. Participating hospitals save money on waste disposal costs by recycling non-infectious PVC medical items instead of sending them to clinical waste steams which are either incinerated or sent to specialist landfill sites.

The scheme won the sustainability award at this year’s 2016 INOVYN Awards. Axion’s Principal Consultant, Jane Gardner, collected the award at a ceremony coinciding with the K2016 plastics and rubber show in Dusseldorf in October.