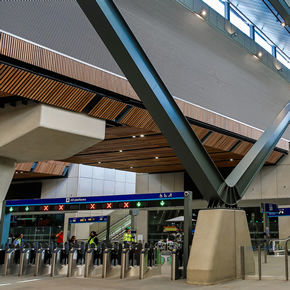 Prater is celebrating the first phase opening of the redeveloped London Bridge Station. The company has worked on the project since 2013, providing design, manufacture and installation services.

Two-thirds of the Victorian train station has now been redeveloped; this month, the improved concourse and three new platforms were opened up for public use.

Once completed, London Bridge will offer an increased number of routes and destinations for the benefit of commuters and passengers. The multi-million pound project is scheduled for completion in spring 2018.

Four years ago, Prater was contracted to work on the station’s building envelope, delivering a combination of design, manufacture and installation services.

Working in conjunction with Severfield, the company tested the build process off-site, utilising a full-sized prototype. This method enabled Prater to address potential issues before work on the complex site itself began.

The collaborating construction teams worked alongside Network Rail, Costain and Severfield to successfully deliver the redevelopment of London Bridge Station