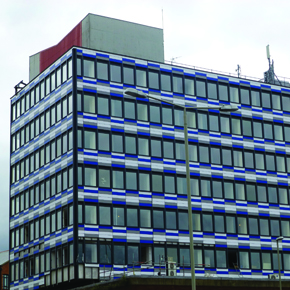 Refurbish or build new – from an energy saving perspective

Danny Phelan, sales manager at Panel Systems, looks at the age old conundrum of whether to demolish and build new or refurbish an existing building…

Increasingly, old buildings are being refurbished and this is largely due to recent advances in façade panels which have the ability to make an aged structure look like new.

It is widely accepted that the environmental impact of refurbishing a building is almost always going to be less than demolishing an existing structure and building new. As building materials carry embodied energy, replacing them with new materials creates new carbon emissions in both their manufacture and subsequent delivery and construction. 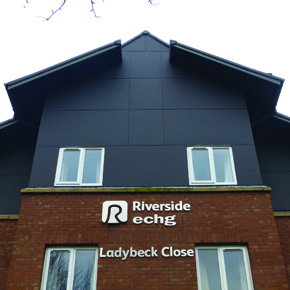 Although it is often argued that a new building will offer greater energy efficiency than an existing one, today’s decorative façade panels, when combined with exterior grade insulation fixed to the outside of the building beneath the panels, provide extremely high levels of thermal performance.

The primary reasons for refurbishment are that a building has a change of usage, such as being transformed from a workplace into apartments, a hotel, office or leisure facility. The work usually includes replacing degraded finishes and components, upgrading the façade, tailoring the space to a new usage and improving the building’s energy efficiency.

It may also be the case that an existing building cannot meet modern performance requirements in terms of energy efficiency and reduced running costs. Assessments would therefore be made to determine whether the building can be upgraded to become more energy efficient and, in doing so, reduce running costs and lower C02 emissions.

On a recent project, panels were cut to size, drilled and supplied  to upgrade the exterior of a seven storey office building and nightclub in Leicester city centre. The new façade makes the overclad building virtually indistinguishable from a new build.

Upgrading the existing building structure rather than demolishing and starting again significantly reduced the capital budget and resulted in a development with a much reduced carbon footprint and build schedule. 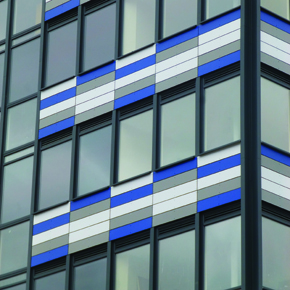 The existing concrete façade lacked aesthetic appeal, so 8mm thick external cladding panels were supplied in three colours which were fixed to an aluminium framing system anchored to the existing concrete structure. As the panels were supplied ready for rapid installation on site, it meant the façade met the requirements of modern methods of construction.

This resulted in work being able to carry on when it may have stopped wet trades, such as rendered systems.

This particular refurbishment involved VIVIX panels which are still relatively new in the UK as a façade material, but are growing in popularity as an overclad solution. These homogeneous panels have been specifically engineered for exterior façade panels and have a decorative surface on both sides.

The thermosetting resins are reinforced with cellulose fibre, which was desirable on this project as it provided a low maintenance façade that will keep its looks for the long-term. The panels are also resistant to impact, abrasion and are UV and weather resistant, making them a sound choice.

Building new is undoubtedly more carbon intensive and has a wider environmental impact. In addition, low energy refurbishment is much more environmentally friendly than building new and is therefore a more attractive way forward for a large number of local authorities and private building owners. For this reason high performance cladding panels offer a compelling choice.

The future of refurbishment looks positive as new façade materials provide designers with more options, both in terms of performance and aesthetics. With many thousands of buildings across the UK requiring some form of upgrade, specifying a low maintenance façade that retains its aesthetic appeal is proving to be a popular way forward.

In addition, providing an overclad solution to an existing building can be relatively cost-effective compared to demolition and new build, as well as achieving a much lower carbon footprint.

Read more in the December issue of ABC+D Magazine