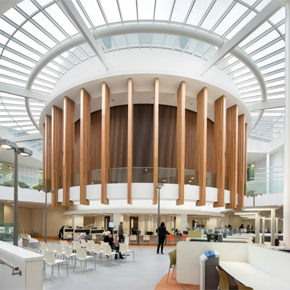 Derby Council House has been reinvigorated by Corstorphine + Wright to provide an easily navigable one-stop-shop for the local community. PSB Magazine finds out more…

In 2010, national architectural practice Corstorphine + Wright was appointed by Mace (via the OGC framework) to deliver a complete refurbishment of the Derby Council House, on behalf of Derby City Council.

Since its construction in the 1930s, Derby Council House has been an integral part of Derby city centre, and has become an important landmark. It was therefore vital for Corstorphine + Wright to retain the external facade while adapting the interior space to improve efficiency and flexibility.

Derby City Council wanted to bring a total of 12 departments under a single roof at the Council House, with the space providing office accommodation for up to 2,000 employees – up from the 500 that had previously been based at the building.

Appropriate space would also need to be provided for elected members, with a new council chamber suitable for both public and private meetings. In addition, the council wanted to improve its public-facing facilities, creating a one-stop-shop for members of the public.

The project commenced in January 2010. Planning was gained by December of that year, enabling demolition to be started in the summer of 2011, with completion in December 2012. 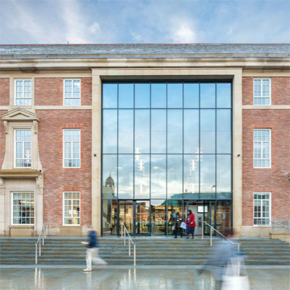 Due to the building’s Locally Listed status, Corstorphine + Wright secured a certificate of immunity from English Heritage during the design development stage to safeguard the building from a Statutory Listing. A detailed heritage impact assessment was also produced to sit alongside the Design and Access Statement.

The practice began by reconfiguring the heart of the building, installing steel framed twin atria and large circular fanned roof light to define the circumference of the chamber space.

In order to ensure the best possible quality of space for the council chamber and surrounding areas, the chamber was relocated to the centre of atrium, opening up and enhancing the spaces around it and providing a strong focal point to reflect its main democratic function.

The atrium itself was designed to bring light deep into the building with a new continual radial skylight, and to house the main reception which leads into the one-stop-shop, housing the Council’s customer-facing functions, shielded by the chamber drum.

A new glazed entrance was built into the original façade and facing public realm space was installed, complemented by a dedicated staff entrance, which originally formed access to the courtyard space.

At the commencement of the project, it became clear that the building’s original cellular office layouts had been further sub-divided over time, creating a cluttered and cramped interior that was desperately in need of refurbishment. 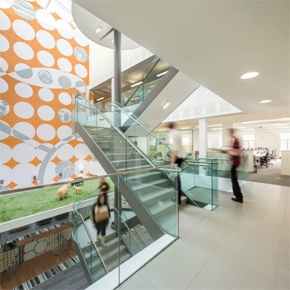 By improving the utilisation of the internal space and adding a third floor within the existing roofline, Corstorphine + Wright increased floorspace from 11,000 to 17,000 square metres within the same footprint.

The open-plan office spaces provide flexibility and a blend of high quality workspaces, breakout, private and semi-private meeting areas so that employees have numerous ways to interact with their colleagues.

Sustainability was a byword throughout the project, with Derby Council’s ambition to deliver a sustainable building that met BREEAM Excellent and EPC A ratings.

Corstorphine + Wright took advantage of the building’s location on the edge of the River Derwent to construct and install a hydroelectric generator to deliver clean, renewable power to the council house.

The initiative lifted the EPC rating to A+, with an official rating of minus 25 and a final BREEAM score of 81, placing it at the top of the Excellent banding.

The external fabric of the building was retained and enhanced with the U-values of the façade substantially improved. Existing roofs were reconstructed to modern standards, creating further improvements to insulation values.

While the construction budget was set at £30m – which included an amount set aside to address longer-term maintenance issues – competitive tender returns meant that the council was able to bring the project, including all fixtures and fittings, well below this figure.

The project has regenerated a landmark building in the city centre and transformed the culture of the organisation and the way that it works.

Read more in the July/August issue of PSB Magazine