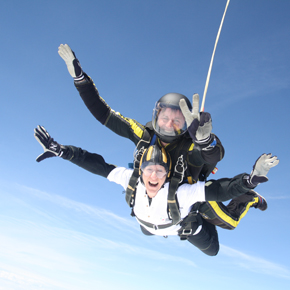 REHAU’s ‘Redkites’ charity skydive has been named one of the top 1% of fundraisers for 2015 on the Just Giving website.

The skydive generated over £5,000 for the Prostate Cancer charity, putting REHAU in the top 5000 of the 500,000+ people and companies who raised money via the Just Giving fundraising website last year. 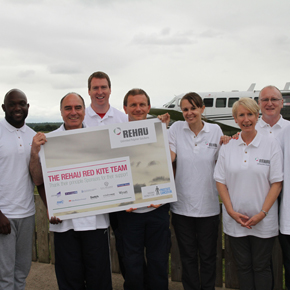 REHAU’s Redkite charity skydivers thanking some of their biggest supporters who helped them into the top 1% of JustGiving fundraisers in 2015.

REHAU’s group of nine Redkites completed a series of tandem skydives from 15,000 feet, the maximum height allowed for civilians without oxygen.

“As it turned out, jumping from a plane at 15,000 feet was the easy part and all of us really enjoyed the experience. The real thanks must go to our customers, colleagues and suppliers who gave us their backing and helped us make such a fantastic donation to the Prostate Cancer charity.”