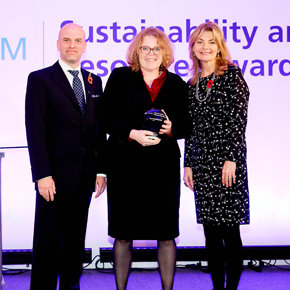 This is the expanding PVC takeback scheme for medical devices’ fourth award since it was created three years ago.

Consecutive growth, year after year, has resulted in RecoMed now operating in 11 hospitals across the UK, with over ten new ones currently in the process of implementing the scheme.

The above photo, from left to right, shows Jim Kendall, Operations Director for London Energy, Jane Gardner, of Axion and comedian Jo Caulfield.

Jane Gardner commented on the award: “The scheme has gone from strength to strength, with 2017 seeing an exponential increase in the volume of PVC medical device waste collected.

“We hope this award will help to further showcase the scheme’s sustainability goals and we are excited about growing the number of hospitals where it is implemented.”

Run by Axion, in partnership with the British Plastics Federation with funding from VinylPlus®, RecoMed is the UK’s first PVC takeback scheme for single-use medical devices from hospitals.

The hospitals involved in the scheme are saved money on disposal costs by RecoMed, through putting devices into recycling containers for collection rather than sending them for incineration or specialist landfill.

Uncontaminated items gathered in the scheme include oxygen tubing, oxygen and anaesthetic masks and IV bags.

Currently, the scheme has recycled more than 5,000kg of uncontaminated PVC, which is equivalent to over 150,000 masks. Amazingly, 2,800kg of this has been collected this year alone.

The collection of devices is all managed by RecoMed, with hospital staff contacting the team when a collection is needed. Then, a logistics company is organised to exchange the full pallet crates for empty crates.

BPF Senior Industrial Issues Executive Matt Davies said: “RecoMed is flourishing and we are very proud that the scheme has won its fourth award. As it is implemented in more hospitals, even more valuable material can be recovered and put to good use in new applications.”

Brigitte Dero, VinylPlus General Manager, added: “Looking at the successful results of RecoMed, we, as VinylPlus, are proud to fund this scheme since 2014. The RecoMed scheme is a concrete example of how PVC waste – in this case PVC used in medical applications – can be recovered safely and used in new applications. VinylPlus will continue to invest in the recycling of medical devices in the future.”