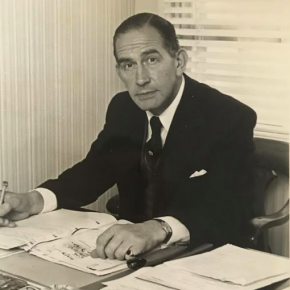 The Glass and Glazing Federation (GGF) has remembered Maurice Anders of T A Anders and Co Ltd, a founder Member of the Federation, who recently passed away.

Maurice, who was 91, worked in the Glass Industry all his life. He went straight into the business on leaving school during the war, following the death of his father who had established T A Anders & Co in 1931, after leaving Pilkington Glass.

The family, who hailed from St Helens, were thought to have members working at Pilkington Bros since the 1840s. When Maurice joined, the business was located in Rusholme, Manchester.

Maurice met his wife to be, Jean, whilst an apprentice at R H Armstrong in Salford in 1944 and together they moved the business to railway arches in Manchester city centre in the early 1950s and then to Liverpool Street, Salford in 1959.

Following the announcement that a new underground railway would be built running practically below the factory, Maurice was forced to move again; this time to Frederick Road on the site of his and Jean’s former employer, R H Armstrong, in 1986.

The business remained here until 2017 when, despite being in his ninetieth year, Maurice was still taking an active interest.

Having been involved in the Plate Glass Association (PGA) and the Flat Glass Council (FGC) and then Glass and Glazing Federation, he was immersed into his roles well into his eighties, attending meetings in London and, until recently, still making an appearance at the annual Glassman’s Lunch.

Even in his latter years, he visited T A Anders’ new premises on Guinness Road, Trafford Park, to share his wisdom, sage advice and sharp wit to those he met, who were keen to listen.

Peter Stuttard, GGF Regional Manager, who knew Maurice well, commented: “Maurice was a true gentleman and will be very sorely missed by so many, my sincere sympathies go to his family and friends.”

Steve Rice, GGF Director of Technical Affairs, added: “I was very sad to hear the news of Maurice’s passing, a loyal GGF Member and a great industry man, but most importantly a truly great person. My thoughts are with his family at this time.”

The GGF, on behalf of its staff and Members, sends sincere condolences to the Anders family at this difficult time. For friends, former colleagues or GGF Members who knew Maurice, his funeral is taking place at 11am on Saturday 15 September at Agecroft Crematorium, Langley Road, Salford, M27 8SS.

The family has requested that no flowers be sent but would prefer a donation to be made to the British Heart Foundation – https://www.bhf.org.uk/how-you-can-help/donate/donate-form