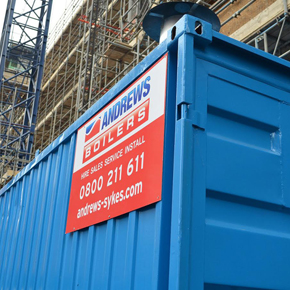 By renting a temporary, 1,500kW boiler from Andrews Boiler Hire, East London authorities ensured that heat and hot water were delivered to a new property development, despite problems with the local district heating system.

The construction project, which was undertaken by several local authorities, aimed to create extra affordable housing in East London. However, like many regeneration programmes throughout the capital, this development had an impact on the central, district heating system on which the community was running.

The district heating system was operating close to capacity; when the new properties were added to it, three individual 500kW modules broke down under the increased load.

Under such strain, the system failed to supply enough heat and hot water to the community.

In search of an alternative heat source to support the struggling system, the area’s energy supplier contacted the boiler division of Andrew Sykes, Andrews Boiler Hire.

Engineers from the division arrived on site to conduct a thorough survey, before specifying a 1,500kW containerised boiler to be temporarily connected to the existing system.

With this support in place, the faulty units could be taken offline for servicing, and replaced if necessary.

Andrews Boiler Hire suggested that the 9,000 litre fuel tank be installed inside the main plant room, instead of next to the neighbouring busy road. The system was kept behind anti-vandal doors, with a heavy duty padlock guaranteeing its safety while on hire.

The rental boiler and fuel tank remained in place for several weeks, enabling the local authorities to decommission the faulty units for repairs. It was kept online until the broken units had been serviced, and replaced or reconnected.