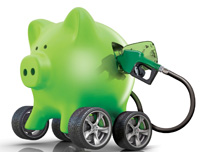 Steve Clarke, Group Marketing Manager for Fuel Card Services, has warned van users to treat all fuel consumption figures with caution: Van users can hardly expect that LCV manufacturers’ claims are any more accurate. Until this environment changes, van users should only trust the statistics they compile themselves.

The three-year study surfaced during the same month as an RAC Business report surveying 1,000 business decision-makers.

RAC Business found that 44% of those surveyed cited fuel economy as their top priority when acquiring new vehicles. The figures suggest that half of business vehicles are bought for their supposed fuel efficiency, but based on false pretences in 93% of cases.

If they had only surveyed van users, a higher figure would not have been surprising. The only sensible option is for firms to rely on their own fuel consumption evidence, while ensuring that they continue to refuel as cost-effectively as possible.

The Worldwide Harmonized Light Vehicles Test Procedure – a testing protocol for fuel consumption – has been proposed by the EU to counteract the issue. This may be implemented across the EU during the coming two years, in line with ever-greater EU emphasis on sustainability.

While everyone waits for fuel consumption figures that can be trusted, van users should re-evaluate their fuel procurement. Many will have been using the same fuel cards for years, not realising how that market has changed significantly.

They need to reassess, comparing everything available. It makes no sense to look for fuel-efficient vans but not to refuel them cost-effectively.