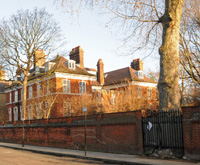 The Grade II Listed, Georgian style building was originally built for the Bishop of Rochester in 1895. It has since been converted into an Early Years Centre.

However, in Spring 2015 the London Underground’s Northern line extension began, disrupting the environment of the nursery.

The original single glazed windows offered marginal acoustic protection from the works, which are not due to be completed until 2020.

In order to retain a quiet, comfortable environment for the users of the nursery, Selectaglaze was contacted to provide a solution using its bespoke secondary glazing systems.

Its glazing systems were used in other projects, as a result of similar works completed on the Crossrail scheme.

The independent tailor-made windows system, set 100mm or more from the existing window, attains a noise reduction of around 43-45dB.

With the centre being Grade II Listed, secondary glazing was an ideal solution as it is a reversible adaptation.