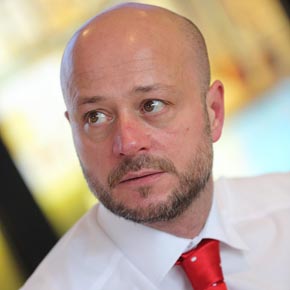 Reynaers has partnered with the Society of Façade Engineering (SFE) for the second consecutive year to support FAÇADE2016.

Reynaers’ sales director, Paul Duffy (pictured above), commented: “Reynaers is a keen supporter of innovation in the construction industry and we will continue to support the recognition and rewarding of excellence in façade design, engineering and application.

The standard of last year’s entries was outstanding and I look forward to seeing the next wave of exquisite façades entered into these prestigious awards.”

The Outstanding Façade Innovation 2015 award was presented jointly to Arup and Bellapart for the Bombay Sapphire Distillery.

FAÇADE2016 will take place on December 1st at the Glass Supper, held at Gibson Hall in London. Winners will be presented by Chris Macey, FSFE, former Chairman of the SFE and founder of the FAÇADE competition.

Entries must be received by the 31st October and will be judged by a panel of experts from the field of façade engineering and design including Chris Macey, Graham Hackley, Patrick Ryan, David Metcalfe, Mark Taylor, Steve Lo and Saverio Pasetto.