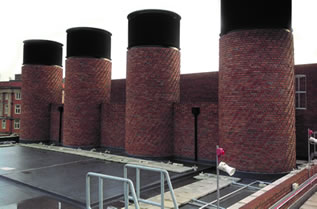 A 1,000sq m of the cut-fall insulation system G410 15ELF Dark Grey membrane was used alongside 5000E vapour barrier, specified due to its 20 year guarantee.

The theatre, which is a former chapel built in the 19th century, was falling into a state of disrepair due to a leaking roof, but by reusing the brickwork from the existing building 90% of the materials were able to be recycled.

The Royal Institute of British Achitectsí Stirling Prize was awarded to the theatre after it beat off competition from buildings such as The Shard and the Olympic Swimming venue.

Richmond Roofing carried out the installation at Everyman Theatre and finished the work ahead of schedule.