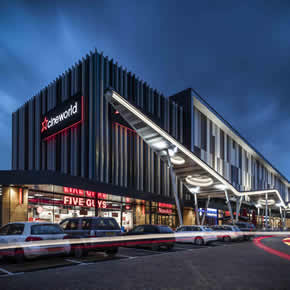 The multi-million pound project forms the second phase of the development by the Whiteley Co-ownership. Designed to complement the contemporary aesthetic of Whiteley town centre, the cinema building has been clad with ROCKPANEL Rockclad

As the cinema is an internal space that relies on darkness, the presence of glazing has been limited to the foyer. The front and rear elevations have benefited from the installation of Rockclad in Fawn and Grey White and Dark and Light Bronze.

The façades were intermixed with inset ROCKPANEL Chameleon; the iridescent boards were also installed on the eastern end of the cinema, which fronts the town. 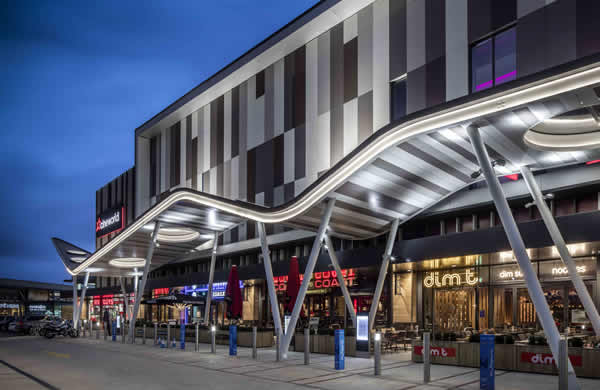 Depending on the angle of the view, the colour of the ROCKPANEL Chameleon changes, compensating for the lack of glazing by animating and enlivening the building. At the front of the multiplex, the architect has created a wave form canopy, offering a contrast with the linear façade.

Supplied by Taylor Maxwell, the ROCKPANEL products have helped the new multiplex to achieve a BREEAM rating of ‘Excellent’. All certified construction elements with ROCKPANEL Durable and Durable ProtectPlus façade boards boast impressive Green Guide Ratings of A+.