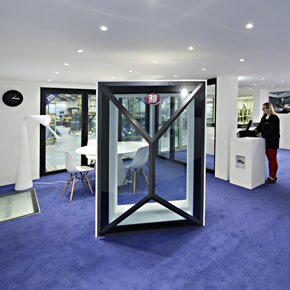 As part of its plans for expansion, Roof Maker has opened a new showroom, which is based in Thurmaston in Leicestershire.

Since its establishment in 2001, Roof Maker has experienced significant growth. In 2015, the company culminated its highest sales figures, recording a turnover of £10 million.

Its new showroom, which is based at its Thurmaston production facility, is the first in a series of planned developments to increase its manufacturing capacity.

Roof Maker will be able to showcase its entire range of roof windows, skylights and roof lanterns at the new showroom.

The company is renowned for its Slimline triple glazed skylights and roof windows: these products incorporate ‘Sun-Tint’ thermochromic glass, which automatically self-tints in response to the glare from direct sunlight.

It has also recently launched ThermFold, an insulated aluminium folding sliding door system, which has been developed to complement its existing range of skylights and roof windows.