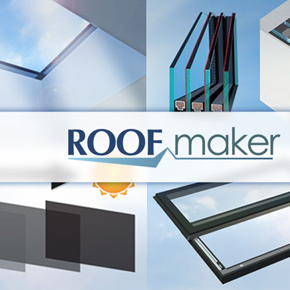 Roof-Maker has announced an annual turnover of £10 million, marking the company’s most successful year of trading since it was founded in 2001.

The specialist manufacturer of aluminium and glass roof lights finished the year on a record 2 months of averaging 175 roofs a week being dispatched from its Leicester manufacturing site during September and October.

Having finished the year with a record of averaging 175 roofs per week being dispatched from its Leicester manufacturing site during September and October, the specialist manufacturer of aluminium and glass rooflights has seen continued growth year on year.

This year, Roof-Maker achieved many milestones including the launch of several successful products, including industry firsts such as its self-tinting solar control glass, super insulated lightweight hinged and slide opening rooflights.

The year also marked the appointment of a senior board of directors with Andrew Huddlestone as CEO, Ian Poore as CFO and Chris Anthony as Sales Director, with the company expanding its network of installers and operations.

The existing management team was also strengthened with the addition of Quality, Marketing and Purchasing Managers.

Roof-Maker CEO Andrew Huddlestone commented: “With close to 70 people in the business, we are well posed to manage the continued growth of the company into 2016 and beyond. We are ready to launch some very exciting new products designed to perfectly match our rooflights.

Customers are clearly enjoying the ability to buy direct from the manufacturer rather than a middleman and we are continuing to enjoy growing domestic, commercial and international business as far as Australia.”

Roof-Maker has been nominated for numerous industry awards this year in recognition of its success in the marketplace and has exciting growth plans in 2016 to expand its Leicester manufacturing site into neighbouring factories and land.