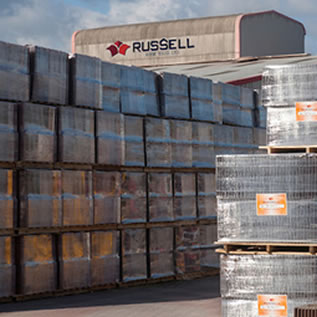 The work is scheduled to begin next spring and redevelopments will help to improve speed and efficiency, as well as provide a 30 per cent increase in capacity at the site.

Work will be carried out on the rotary packaging system, from Vortex Hydra who first designed and installed the plant in 1990, to further increase production at the Burton factory.

The latest investment comes after Russell Roof Tiles has seen a 30 percent increase in sales so far in 2014, echoing the overall improvements across all sectors of the industry.

New construction contracts awarded in August reached £5.3 billion, a 16.6 per cent increase compared to the same month in 2013, with the residential sector seeing the highest number of contracts awarded and experiencing a market growth of 26 per cent.

National Housing Building Council data for the three months leading up to the end of August showed 37,300 housing starts, five per cent above the same period in 2013.

There are currently 152,400 plots under construction, which is 10.5 per cent higher when compared against last year’s figures.

Russell Roof Tiles celebrates 50 years at its Lockerbie plant and 25 years in Burton on Trent in 2015, with the company employing a team of 150 across its three nationwide sites.