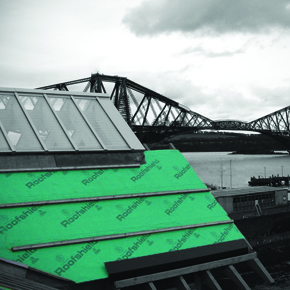 Roofshield continues to cover all bases

The A. Proctor Group highlights the benefits of Roofshield – its three-layer, nonwoven, spunbonded, polypropylene breather membrane which is intended for use as a pitched roof underlay… 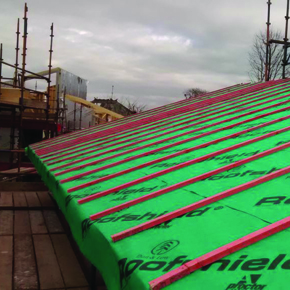 The UK’s history of domestic cold pitched roof construction has led to a variety of solutions for insulating roof spaces to achieve greater energy efficiency. However, the resulting temperature differential has led to issues of condensation in lofts, particularly in colder months.

The traditional solution to this was to introduce ventilation in order to allow air circulation to remove moisture from the roof space. However, more recently, breathable membranes have been adopted as an alternative.

Due to the increased drive to create airtight building solutions, many such membranes prevent any air movement and a debate has been running for some time in the industry over whether roofs are installed to perform as designed. This has led to a recommendation for a VCL to be used at ceiling level to reduce the moisture load into the roof space when airtight underlays are used.

Roofshield, developed by the A. Proctor Group, takes a different approach. By combining a far higher degree of vapour permeability with a structure which allows air circulation through the roof, it will still perform in conditions in which airtight alternatives will not.

Following a Partners In Innovation (PII) study undertaken by Glasgow Caledonian University, it was found that membranes which are both air and vapour permeable (such as Roofshield) further reduce and inhibit the formation of condensation on the underlay when the roof is unventilated.

This research led to the NHBC making an official recommendation that Roofshield could be used without ventilation in roofs.

The 2015 version of the BS 5534 Code of Practice for Slating and Tiling is currently causing a stir in the industry, because in addressing wind uplift issues, it makes requirements on certain membrane products to be taped at laps.

However, for the A. Proctor Group it has the benefit of further driving specification of heavier roof membranes like Roofshield.

The company has undertaken full third-party testing to establish that it is fully compliant with the standard, requiring no tape and is providing specifications to interested parties on that basis.

Find out more in the March issue of ABC+D Magazine