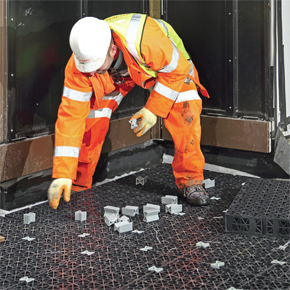 The population of large city centres in England and Wales has more than doubled since 2001. This means we currently have more buildings in urban areas and less space for natural rainwater drainage than ever before. With this in mind, architects and developers need to look at ways in which rainwater can be captured, stored and managed.

Ian Crickmore, technical director at Polypipe Terrain, explains to ABC+D how the use of blue and green roofs can provide a Sustainable Urban Drainage System (SuDS) solution for our city centre buildings…

In order to accommodate an expanding population, the number of tall buildings in British city centres is rapidly increasing. Although this is great news for the construction industry, it means that we also have limited ground space for rainwater to drain away naturally. While most rainfall events in the UK produce less than 5mm of rain – and can be controlled adequately by traditional systems – the effect of climate change and increased urban migration means buildings now require engineered solutions to attenuate, discharge or re-use rainwater, to protect citizens from flood events. 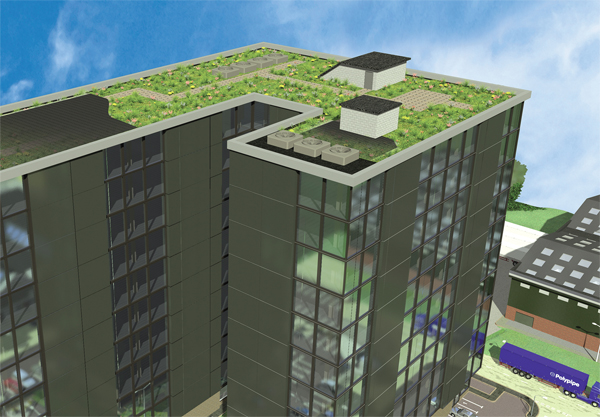 While rainwater is often stored below ground level, in city centres, where space is at a premium, this is often not an option. Without the expensive excavation of ground, or loss of valuable space for sellable assets like underground car parking, there is simply no room to store rainwater at ground level in urban areas.

Fortunately, all of these issues can be mitigated through the installation of green and blue roofs at the podium or roof level of a building. Green roofs are partially, or completely covered with a growing medium, planted over a waterproofing membrane, incorporating building drainage and irrigation systems. As the name suggests, as well as storing and attenuating rainwater, green roofs enable the planting of seeds and local vegetation, all of which is sustained through rainwater stored in the green roof, encouraging wildlife and bio-diversity.

With a similar system installed, blue roofs are specifically designed to store and control the flow of water, intercepting rainwater at source and reducing peak flow using flow control outlets. Blue roofs can be open water surfaces, storage within a porous media or beneath a surface within a proprietary modular geocellular system.

Like green roofs, blue roofs store excess amounts of rainwater and release it at a controlled rate, preventing it from overwhelming already stressed sewer systems. This can be managed through a flow control outlet, at a rate agreed by the property developer and water companies.

Storing water at roof or podium level doesn’t just stop sewer systems from being overwhelmed, it also allows any captured rainwater to be harvested and re-used within the building itself. A combination of population growth and an increased use of potable water for applications such as flushing toilets, means rainwater is not being utilised in a sustainable way; by replacing potable water with captured rainwater for applications such as these, a significant saving of these precious resources can be achieved.

From laundry facilities to car washing, any rainwater stored via a blue roof can be used. Studies show that typically only 9% of water within commercial buildings is used for drinking, demonstrating an increasing need to consider rainwater harvesting and re-use. Added to this is the importance of standards such as BREEAM, in determining reductions in mains water usage in conjunction with other green technologies.

Without the careful consideration of Sustainable Urban Drainage, architects and developers risk losing out on valuable commercial space, while contributing to the poor drainage and consequent flooding often seen in today’s city centres. Therefore, podium and roof level attenuation should be a consideration for all city centre residential and commercial buildings.