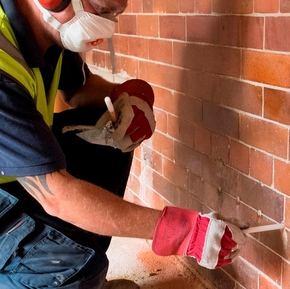 Safeguard Europe solutions eliminated damp and woodworm in the Victorian conversion project and re-development at Askham Bryan near York where a mid-Victorian complex consisting of a former estate manager’s house and stables was being converted into 5 executive homes.

Property Care Association contractor of the year Brick-Tie Preservation specified the treatments. They identified rising damp in the walls and Common Furniture Beetle infestation in the roof timbers in his pre-contract survey.

Any treatment for these problems had to maintain the buildings’ original appearance as the developer, Fountainhead Ventures, saw it as a desirable feature as the brickwork was an attractive salmon coloured engineering brick, with ‘penny’ jointed bed-joints and variable thickness. So any remedial work would need to be carried out from one side of the walls. In some cases the walls would be insulated internally but others would remain bare brick, forming corridors between areas.

Hindle opted for a two-stage solution for the treatment of rising damp, using Safeguard’s Dryrod damp-proofing rods on their own for areas where the brick was to be left exposed and the Dryzone Express Replastering System for areas where the internally insulated walls needed to be re-plastered.

Brick-Tie’s managing director Bryan Hindle: “We’ve used Dryzone damp-proofing cream since Safeguard first brought it out and it’s a proven winner, but it requires either remedial plasterwork or plasterboard, so we went for the new Dryrod as it doesn’t need either in this case. Both products are BBA certified, unobtrusive and quick to install. In performance terms Dryrod is the nearest product on the market to a physical DPC. It’s also easy to check – if there’s a Dryrod in each hole then you know that the right material has been transferred into the wall, right where it’s needed.”

Treatment can be invisible

Importantly for heritage sites such as the development at Askham Bryan, the treatment can be invisible because rods can be removed from the mortar after six months when their active ingredient has dispersed into the surrounding masonry. Then the drill holes can be hidden by repointing with colour matched mortar.

The rods can even be installed effectively in highly saturated walls that are very porous and either highly alkaline – such as in new mortar – or with low alkalinity (old mortar).

These materials combined allow for treatment and room reinstatement in around a day – a massive improvement over the weeks that more traditional methods may take.

All products within the Dryzone System range are BBA approved, both Dryzone cream and Dryrod damp-proofing rods are patented methods for creating a DPC in brick, coursed stone, rubble infill and cavity walls.

Unlike other chemical DPCs, they are not injected under pressure, so not only are they up to three times faster to install than alternative chemical injection systems, but also presents less risk of waste or spillage.

The development re-purposes stables, a carriage house and cottage that were constructed between 1879-1885, when the fashion was to build ‘model developments’ that showcased the latest and most innovative products and methods. As a result all the materials and craftsmanship is to the highest standards, so there is an early form of damp-proofing in the form of a course of perforated glazed bricks, most of the walls are three bricks thick rather than two and the facade is made of mainly salmon red engineering bricks that will highlight any external treatment.

Andrew McMillan of Fountainhead: “Brick-Tie came up with a solution that avoids showing the drill holes externally and the result is a damp-proof course that nobody knows is there”.

The woodworm infested roof timbers were dealt with by removing timbers from the worst affected areas and replacing these with new pre-treated timber and treating the remainder with Safeguard’s Soluguard Woodworm fluid.