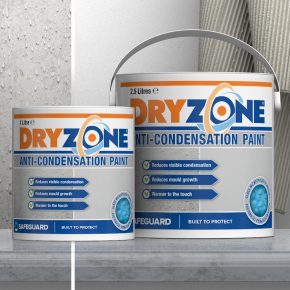 Safeguard Europe’s range of anti-condensation and mould-resistant treatments not only assist in condensation control, but also eradicating and preventing the associated growth of black mould.

And as winter drags on, with windows staying closed and home heating high, condensation – the most common form of domestic damp – becomes most problematic, especially for households suffering from fuel poverty.

Condensation is usually a result of daily activities such as washing, cooking and bathing where water vapour lands on colder surfaces such as windows, walls, and cills.

The condensate then promotes black mould growth, long-established as harmful to health by exacerbating asthma and causing other respiratory problems.

The Dryzone Mould Elimination Kit takes a dual action approach. First, the Dryzone® Mould Eliminator is used for the near instant removal of the black mould and staining.

Second, the Dryzone®100 Mould Preventer is a sterilising agent that kills the remaining mould spores and hyphae and prevents regrowth for extended periods, and without salt residues.

While household cleaners and bleach seem obvious solutions, results are temporary as they deposit hygroscopic – water-loving – salts which retain moisture and lead to more mould.

If the cause of condensation has been dealt with by heating or ventilation, redecoration with Dryzone® System Mould Resistant Emulsion Paint.

Alternatively, Dryzone® Mould Eradication Additive can be used to make any paint mould-resistant, as well as confer the benefits on grout and wallpaper paste.

Safeguard offers two IWI technologies, depending on substrate. Stormdry EP board is a ‘skinny’ 13mm-thick aerogel IWI panel which reduces the U-value of a damp, uninsulated masonry wall from 1.7 W/m2K down to 0.87 W/m2K. It can be stuck straight onto existing flat walls.

Where walls are uneven, awkwardly shaped or even curved, Safeguard Ultrotherm provides a solution. It is supplied as convenient, flexible 12mm-thick tiles that can be installed over existing plaster.

It can also be fixed without removing and reinstating fixtures like skirting boards; while insulated trim beads are used against door and window reveals to reduce the problem of cold bridging.

Ultrotherm typically improves the thermal resistance of solid brick walls by 40% and has an expected service life in excess of 25 years.

Where ventilation can be installed, Safeguard offers a compact range of extractor fans and PIV units. PIV works by drawing warm air from roof spaces and imperceptibly pushing it into the property, creating a ‘positive pressure’ environment which squeezes moisture laden air out of it.

It has the additional benefits of flattening heat gradients in properties – making them feel warmer – and operating continuously beyond tenant control.

Safeguard Europe’s range of market-leading, proven damp-proofing solutions is supported by the company’s own highly qualified and experienced staff.

The support and know-how they offer is extended to contractors, specifiers and property owners and includes technical advice, specification help, research and even in-house laboratory analysis of plaster and masonry.