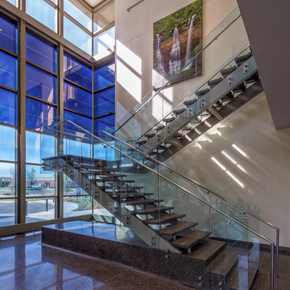 SageGlass to launch electronically tintable glass at the FIT Show

SageGlass has announced it will showcase its electronically tintable glass at this year’s FIT Show this April.

SageGlass Lightzone will be replacing 132 conventional glass units with a total area of 314 metres squared in advance of the product’s UK launch at The FIT Show.

The installation will allow the real-world demonstration of the product, which allows the creation of up to three variable tint zones within a single pane of glass. SageGlass Lightzone will be showcased throughout the three days of the event, which takes place between the 12th – 14th April at The International Centre, Telford.

Once installed, the glass can be automatically controlled by four external light sensors. The sensors detect predetermined light levels at which the SageGlass will tint from the clear state of 60% light transmission, in four stages down to 1% light transmission.

All cables and controls are integrated into the system and can be easily installed into the existing curtain walling. Tinting and light levels can be controlled through the SageGlass Mobile App.

SageGlass decided to demonstrate the product at the event due to the high number of glazing industry professionals which will be in attendance at the event.

The company’s partner on the UK Conservatory market, Clayton Glass, will also be featuring SageGlass on its stand at the event.

Find out more about SageGlass at The Fit Show 2016