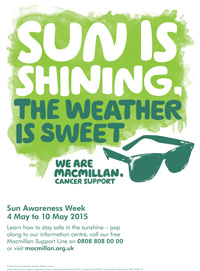 Skin cancer (malignant melanoma) is the fifth most common cancer in the UK. With diagnosis rates increasing faster than any of the current top ten cancers in the UK, those who work outdoors, such as builders and construction workers, are at even greater risk of developing the disease.

Sun Awareness Week will be held between May 4th and 10th

It is suggested they are three times more likely not wear sun cream, with one in five men stating that they never wear sun cream outdoors during sunny weather in the UK.

Six Saint-Gobain brands and stores across the UK will be supporting Sun Awareness Week, with the aim to help Macmillan inform and educate more men about the important of prevention of skin cancer, alongside the importance of early detection and diagnosis.

We need to encourage more men to be aware of the signs of symptoms of cancer, so we’re thrilled to have the support from Saint-Gobain to help us reach a particularly hard to reach group about this important issue.

Richard Halderthay, Director of Communications at Saint-Gobain UK, Ireland & South Africa, said: It is worrying that the number of people diagnosed with skin cancer is on the rise. We hope that by working with Macmillan to raise awareness this Sun Awareness Week, we can help empower and educate our male employees, customers and suppliers to take control of their health and seek medical help sooner.