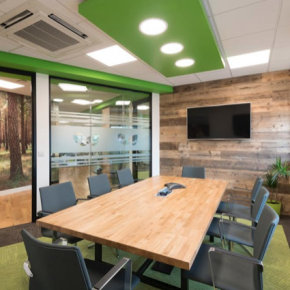 Saracen Interiors has recently completed its first major fit out contract for Enviva, an eight week expand Enviva’s physical presence in the UK with a second office in York.

The 3,000 sq ft space has been designed to bring its logo and corporate colours to the fore to complement the overall look.

Saracen has won awards for its design work in recent years and has been involved in some major projects in Yorkshire since establishing a presence in the North. Director, Michael Page comments: “It’s been great for the team to engage with a company such as Enviva as they were happy to give us scope to explore a variety of ideas to make the space stand out and to deliver a flavour of the business and its brand.”

The leading workplace consultant aims to further build on its business in the North in years to come, having recently opened an office at Manchester’s Media City.