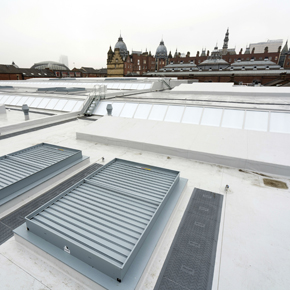 Working with Protech Roofing, Sarnafil Plus has delivered a roofing solution to Leeds’ Kirkgate Market, the largest covered market in Europe.

As part of a multi-million pound refurbishment programme, aimed at improving the iconic market for stallholders and visitors, the leaking roof was targeted for replacement.

With over 800 stalls, Kirkgate Market attracts approximately 100,000 visitors a week. As the roof extends over both the 1976 and 1981 halls, the building had to remain operational while the renovation was taking place.

After the Sarnafil Plus team secured the tender with the project’s architect, Protech Roofing, a registered Sarnafil contractor, spent time on site with those involved in the development.

The company reassessed the original design specification, which called for the existing felt waterproofing to be removed back to the metal decking. As this would cause disruption to the market, with no guarantee of a watertight result, Protect suggested a mechanically-fastened Sarnafil system that could be overlayed onto the existing substrate.

A comprehensive Sarnafil Plus survey and moisture mapping was carried out to identify the areas prone to water ingress. Work could then begin on the nine-month project, which saw a close-knit team working on the roof throughout the year, enduring rain showers and high temperatures. 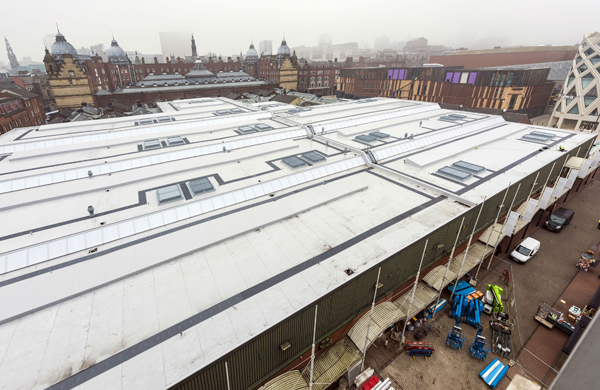 Sarnavap 5000E, a cold applied and self-adhesive vapour control layer, was used to waterproof the market whilst the roofing work was being carried out.

SarnaTherm insulation boards were mechanically fixed to the existing roof, before the Sarnafil S327-15EL membrane in Light Grey was installed. Stainless steel fixings were used to ensure a weathertight and visually appealing finish.

The membrane was cold applied, meaning it was welded together with hot air instead of a naked flame. As it demonstrates compliance with the fire performance requirements of BS476-Part 3:2004 and BS EN 13501-5:2005, the system could be used without restrictions.

Finally, SarnaLights were specified to replace the market’s six rooflights, to ensure that building continued to benefit from natural lighting. This part of the refurbishment was carried out at night to limit disruption to the market.