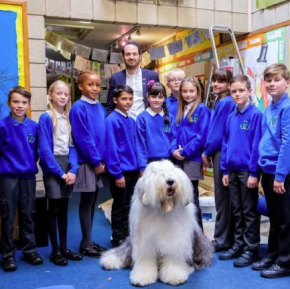 Inspired by the school’s year five pupils, the colour and design transformation has completely rejuvenated and refurbished the entrance hall and main corridor.

After the students shared thought-provoking ideas and design concepts, colours and inspiring images that mirrored the ethos of Lawley Primary School, its staff and the children were opted for.

Launched in April, the competition saw schools submit a 300-word entry explaining why they were worthy of winning the £10,000 transformation and how they would use the funding.

After receiving entries from nationwide, Lawley Primary was one of two winners from judged by a panel that included Education Yorkshire star Matthew Burton and education expert, Professor Stephen Heppell.

“Dulux research undertaken as part of this initiative has shown that a staggering two thirds of schools in the UK lack the funding to make basic refurbishments, so it’s a real honour to be able to give something back to two deserving schools,” he commented.

“In my many years as a teacher I have witnessed first-hand the effects a cared-for classroom or school environment can have on pupils’ wellbeing and grades, and I’ve also seen how neglected spaces can be uninspiring and a challenge to teach in.

“I’m fully supportive of learner-led design. I believe children are much more likely to be engaged if they have a bright and colourful space that they’ve had some element of creative control over, so it’s wonderful to see Lawley Primary School children’s designs brought to life.”

Ian Gisbourne, Dulux’s National Sector Manager for Education, said the Dulux Smarter Spaces initiative has championed the improvement of education environments, with research suggesting student attendance had increased from 90% to 92% in a school in Chester that had benefitted from the initiative.

Carol McQuiggin, Head Teacher at Lawley Primary School, added that it was ‘fantastic for the children to see their ideas materialise’, with the makeover making a great start to 2018.