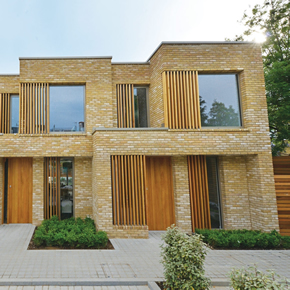 Aluminium fabricator Alumen has received commendation for a Schueco Excellence Award for its work at the Longfords in Teddington, London.

Located on a brownfield site in the Greater London suburb of Teddington, the Longfords consists of 7 new build houses and a duplex apartment.

The housing development, which was designed by 5plus Architects, required a combination of contemporary and traditional architectural styles to ensure an aesthetic contrast with the Victorian properties that surround it.

QDevelopments contracted Alumen to install a number of Schueco products in each new property. The contemporary appearance of the Schueco range attracted Alumen’s attention; with slim sightlines and substantial sizing capacities, the products were deemed suitable to fill the large apertures throughout the housing development.

The company produced the ASS70H1 Lift & Slide patio and ASS70FD bi-folding doorsets for installation at the rear of the homes, using a metallic pearl/beige finish. The bi-folding door profile was also used to fabricate the single doors, which measured up to 2.7 metres in height.

AWS75 tilt & turn windows were fitted throughout; each window was configured to fit its individual cavity differently, with some pushed back and others tilting forward.

The judges of the Schueco Excellence Awards praised the development for its varied use of sliding and folded systems.