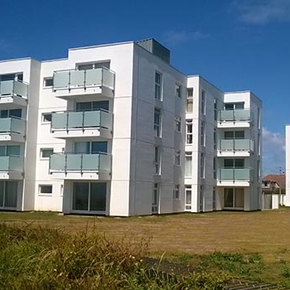 A major refurbishment project at Seagate Court in East Wittering has utilised Alumasc Facades’ Swistherm External Wall Insulation (EWI), to protect against the rigorous weather whilst offering a contemporary design.

Although the scheme was originally solid cavity wall construction, the unforgiving climate and saltwater air had resulted in significant erosion to the exteriors, requiring the management company to embark on a complete refurbishment programme.

An insulated render solution was specified to both withstand the harsh coastal weather and provide an improved, modern appearance to the scheme.

“Sea salt had started to erode the concrete exterior and the brickwork needing repointing.  We wanted a solution that would protect the building and improve its appearance and had initially considered weatherboarding before realising that the Alumasc Swistherm EWI system would meet and exceed our requirements.”

Swistherm EWI was installed to all exterior façades of the four blocks, by Alumasc’s Registered Installer Primars Coatings of Middlesex.

The system, specified at 2200 square metres, is a BBA-approved, direct-fix insulated render system available to use with a selection of insulation materials.

It was insulated with a 90mm EPS and finished with a high performance silicone render.

Swistherm helped address a number of issues which presented itself to the installers.

The complex building design featured ashlar grooves at each floor level and intricate detailing around the balconies – which if not thanks to Swistherm’s easy installation may have posed difficulties for the installers.

Seagate Court now benefits from warmer and more energy efficient homes with an improved U Value of 0.28 w/m2k from the original 0.6 w/m2k.