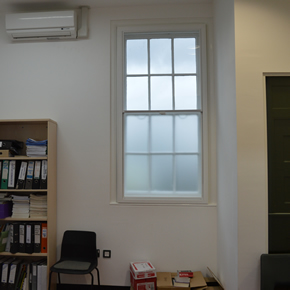 Selectaglaze secondary glazing has been specified to improve the thermal efficiency of an old NAAFI base, which has been transformed into an independent school.

The Grade II Listed building makes up part of Kenley Aerodome, the most complete surviving airfield associated with the Battle of Britain.

The airfield, which was operational until 1978, was used as the front line of national defence throughout the course of the Second World War. Following its closure, the building lapsed into an unsightly state of disrepair; plans were announced to restore and renovate it as an independent secondary school.

Considering the historic importance and Listed nature of the building, the renovation required a lot of thought. Some historical features, such as its primary windows, could not be changed, despite being draughty and allowing noise ingress. 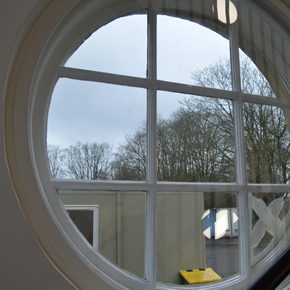 As a Royal Warrant holder, the company boasts extensive experience in working with Listed buildings: it was able to produce bespoke glazing units for the new school, to create a comfortable learning environment for its students and teachers.

For the circular windows, the company supplied its Series 46 fixed unit with a slim line frame and cover channels to conceal the joining. All secondary units were coated in white powder paint to complement the existing frames, offering an unobtrusive solution.

The windows were supplied with twin seals to eliminate draughts and reduce heat loss by around 50%. Since its installation, the secondary glazing has achieved a noise reduction of 45dB.