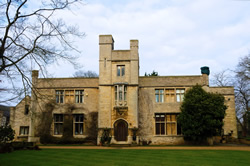 Secondary glazing specified for use in Listed building restoration project

Between 1841 and 1847, Fletton Towers was build for W Lawrence Clark of the Peace for the Liberty of Peterborough.

Now a Grade II Listed property, the building has attracted some remarkable occupants, including novelist L.P Hartley, and many visitors over the years.

It has also hosted several important meetings, such as the League of Nations annual meeting in 1937.

Unfortunately, Fletton Towers fell into disrepair when it was left unoccupied for several years.

The impressive Tudor Style stone building was vandalised and its four and a half acres of land were neglected.

The property was eventually bought by an ambitious family, who undertook the task of restoring it to its former glory.

With high ceilings and a range of single glazed windows, the traditional brick building was rendered thermally inefficient.

Selectaglaze was enlisted to replace the windows; there were a number of different sizes and frames – some wooden, some metal – which complicated the job.

All of the windows needed to be treated and the owners were keen to colour-match the secondary frames to make them as unobtrusive as possible.

A selection of window styles have been used to replace the existing units, including hinged, sliding and lift-out.

The new secondary glazing units are working to reduce heat loss within the home. With high performance seals, they are able to eliminate draughts, resulting in lower heating bills.