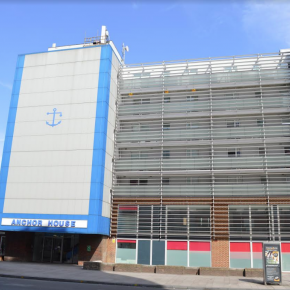 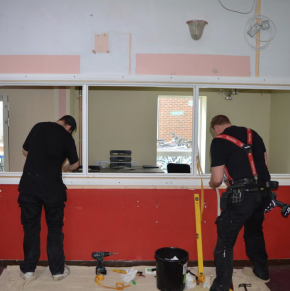 The work on Caritas Anchor House comes as part of Selectaglaze’s on-going association with the CRASH charity, which helps homelessness charities and hospices with their construction projects.

As part of this, the former office space was transformed into a computer suite. To adhere to Health and Safety regulations the area needed to have fire insulated walls. Consequently, it was decided that three fire resistant internal windows should be installed fashioning internal vision panels to provide a bright and airy area where individuals could see in and out. This ensured that users felt secure but with suitable acoustic insulation to help attentiveness, as well as fire resistance for duty of care.

This is when CRASH reached out to Selectaglaze to ascertain if they would donate secondary glazing for the computer suite at Caritas Anchor House.

In addition to the donation from Selectaglaze, Pilkington also donated the Pyrodur fire-resistant glass to support the secondary glazing installation.

The successful installation of secondary glazing has significantly aided Caritas Anchor House, a small gesture from Selectaglaze and Pilkington that will be a massive help for the residents to advance their efforts towards a better future.

“The glazing supplied has been such an important donation for us,” said Amanda Duberry from Caritas Anchor House. “We wanted to make this new space as open and light as possible to create a feeling of space and safety, and to enable our staff to see what is happening in the room without having to be in the space directly. We are extremely grateful to Selectaglaze and Pilkington for their donations, and to CRASH for connecting us up with Selectaglaze to make this all happen.”