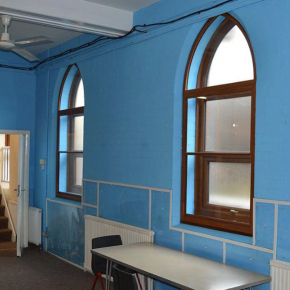 Selectaglaze provides a solution for noise egress at a church

Selectaglaze was recently chosen to resolve the issue of noise egress at a prominent Cherubim and Seraphim Church, St. Michael’s, originally built in 1906.

The church has services throughout the week, ranging from Bible classes and prayer sessions that have been known to run through the night. In addition to its function as a place of worship, the church is also a centre for children in the community, which they use especially during the school holidays. Situated in a densely populated residential area, a solution was needed for noise insulation.

Therefore, the church contacted Selectaglaze, the UK’s leading designer and manufacturer of secondary glazing systems, to provide a solution. 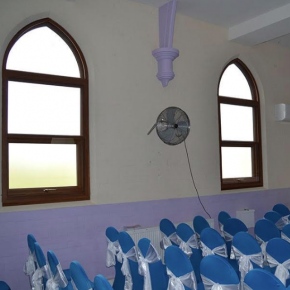 The primary windows are double glazed PVCu units, but did little to lessen noise egress and thermally insulate both floors of the church. Secondary glazing provides a fully independent unit decoupled from the primary window providing a more effective barrier to noise than sealed units.

The greater the cavity between the two panes, the superior the dampening effect. Sealed units with a minimal cavity is less effective at insulating noise. A well-sealed secondary glazed window with a cavity of at least 100mm can provide noise reduction in excess of 45dB. Combined with double glazed windows, up to 56dB is achievable.

Selectaglaze treated a total of 28 arch-headed windows utilising their Series 20 vertical sliding units and Series 46 fixed light system. The series 46 fixed light is easy to shape and curve, so these were formed to create the top portion of the windows and then transom coupled to the Series 20, which formed access to the primary window for ventilation and maintenance. All units were produced with 6.8mm acoustic laminated glass and were finished in a wood-grain colour to match the primary windows.

Since the project has been completed, people have been thoroughly impressed with the acoustic improvements and very little can be heard from the church on the quiet residential road; day or night. The church manager, Remi Adegbola was rather undecided about the wood-grain finish, but having seen the finished job she is delighted with the aesthetic and unobtrusive look of the secondary glazing as well as the acoustic and thermal properties of the windows.

Selectaglaze products are fully tested and assessed for performance and twice yearly quality audits are conducted through the company’s ISO 9001 accreditation and LPCB.

Contractors must be prepared for the growing popularity of smart control technology in residential and commercial building heating systems, according to a new downloadable guide from polymer specialists REHAU.

The MCRMA has published a new Advice Note; AN 06 Safe working practices on roofs: the distinction between ‘walkable’ and ‘non-fragility’.