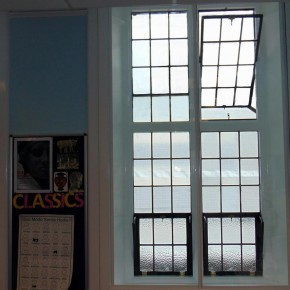 Over the years, the Grade II Listed building, which was originally purpose-built, has been renovated and extended to accommodate the changing needs for contemporary education. In 2005, for instance, the school bought a nearby pub with the intention of converting it into extra classrooms.

The school suffered from draughty, timeworn windows, which were consequential of its age. The original secondary glazing allowed external noise to enter the building, disrupting students and teachers; a quieter and warmer learning environment was required.

35 secondary glazed units were supplied in a variety of styles, including the company’s new series 15 horizontal sliding unit, which has been designed for larger windows.

Selectaglaze’s 6mm toughed low-E glass was installed to the internal side of the existing primary glazing, creating a gap of at least 100mm between the two. This ensured the reduction of sound levels to around 45dB.

Following the installation, the thermal retention of the school improved dramatically; the U-value has successfully been enhanced to around 1.95.