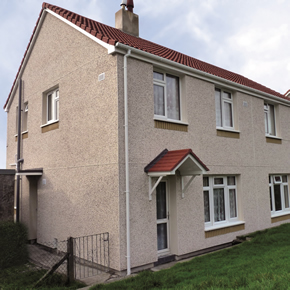 Structherm has supplied its Structural External Wall Insulation (SEWI) system to improve the damaged structure and thermal performance of social housing in a town in South Wales.

The Woolaway homes, which are situated in Aberdare, Rhondda Cynon Taff, were deemed faulty due to numerous structural defects. Such flaws included cracking in the precast concrete columns and reinforced concrete (PRC) panels, high rates of carbonation and low levels of chloride. The bolts, which fixed the panels to the frame, had also corroded. 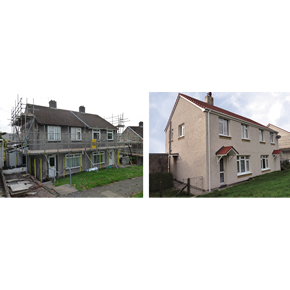 An example of a building, which has benefited from Structherm’s SEWI, during its installation and after its completion

The SEWI system was fitted by local contractor, Thomas CMS; the team received training from Structherm to ensure that they were equipped to carry out the installation.

The project was initially planned for 68 homes in the village; however, as the work progressed, and the benefits of SEWI became evident, additional private properties were added to the agenda.

The SEWI system was able to improve the thermal performance of the buildings, bringing each home up to modern standards.

Residents have benefited from reduced heating costs; the system also succeeded in improving the external appearance of the buildings, creating a pleasant living environment all round.