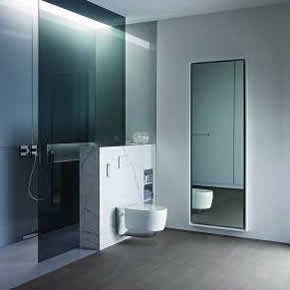 Geberit’s AquaClean Mera shower toilet has been commended for its aesthetic appeal and technical ability with a Red Dot Design Award 2015.

The shower toilet, which was designed by Christoph Behling, was recognised by the Red Dot Design Award’s judging panel in its Product Design category.

The judges were reportedly impressed by the overall look of the toilet, which has been developed with a range of comfort functions to imitate the luxury of a spa lavatory.

The shower spray provides an immediate and continuous stream of water, which is heated to body temperature, whilst the water jet is refined by infused air.

The ceramic shower toilet incorporates a noiseless flush, an automatic lid and a heated seat. A discreet light has been integrated into the design to improve orientation at night, whilst an odour extraction feature has been included to enhance its users‘ bathroom experiences.

The Jury of the 2015 Red Dot Design Awards, which comprises design experts from across the world, commended the shower toilet for meeting hygiene requirements whilst upholding an aesthetically pleasing and technically advanced design.